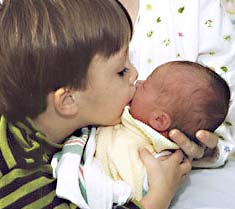 I first became interested in hypnosis for birth after hearing about it from a friend in Massachusetts. I was immediately interested, as I had just made a decision at 12 weeks pregnant to deliver my second child in a birthing center where pain medication was not routinely offered or used. Looking back, I’m not sure what told me I wanted to pursue a natural childbirth. My son was born in 1999, after a 15 hour labor, in a posterior position, and I’d had epidural anesthesia. Although he was healthy at birth, the labor had been highly monitored by obstetricians and equipment; on several occasions the possibility of cesarean or forceps use were mentioned, and his birth happened under bright lights with a team of no fewer than ten medical personnel looking on. In spite of all this, I was very happy at the time because I had felt no pain once I had the epidural, and I had my baby.

Somehow though, as I anticipated the second birth, I realized part of me wanted to experience it as nature let it unfold, without significant medical intervention. The only problem was, I didn’t have confidence that I would be able to maintain trust in my body’s ability to do the work of labor in the face of pain.

Through the internet and word of mouth I met Carolyn Lewis, and I knew from our first phone conversation that she was the person I wanted to work with during this pregnancy and birth. She normalized my feelings about my last birth, and helped me to accept the past while setting new goals for the future. Some natural childbirth proponents suggest that any medical intervention is necessarily detrimental to a healthy birth. Carolyn allowed me to explore my feelings about natural and other pain relief methods, and over the course of the next few months helped me to have faith in my body’s birth process, all without judgment.

My husband and I joined a group class, and began practice with the tapes. Pretty quickly I became adjusted to hearing Carolyn’s voice on the tape and associating it with deep relaxation. In fact, my biggest challenge was to avoid falling asleep immediately during the practice sessions. In order to do this, I saved the tapes for bedtime, and practiced on my own once or twice for 3-5 minute periods each day. We also experimented with him using light touch on my back to deepen my relaxation. For me, silence and my own thoughts worked better than having him give me verbal cues. I also listened to the birthing affirmations when I was in the car or taking walks.

Early in the practice process I had some doubts about why I was making such a big deal about what was going to amount to one day of my life. After all, even the worst birth experiences don’t last forever, right? Or do they? When you listen to women talk about their birth stories, it is clear that these experiences DO last a lifetime; we are shaped by them in ways that play themselves out over the years, for better or worse. It also became clear to me that all the practice wasn’t only for the birth itself, it had benefits in the present and for the postpartum as well. I was learning to become deeply relaxed very quickly, and finding time to nurture myself even as a pregnant woman with a job and an active toddler.

The practice began to really pay off by the time I was 8 months pregnant. I was truly starting to look forward to the birth, instead of dreading it the way I had earlier. We had decided to have Carolyn attend the birth as well, which gave me a lot of courage. I had come to terms with my fear of pain by realizing that I would have lots of support during whatever was to come, and by learning exercises and visualizations that would greatly reduce the risk of a posterior presentation and back labor.

At 39 1/2 weeks, I lost my mucous plug and began having mild menstrual cramps, about every 10 minutes. I had a feeling that labor was imminent, but wasn’t uncomfortable or scared. The cramps began at noon, and continued through the evening. I was very relaxed, actually enjoying the feeling of my cervix opening to begin the work of labor. During the day I went about my regular work feeling expectant but calm. By bedtime I realized that things were picking up a bit. As soon as I turned out the light at 11:00 pm, the cramps turned a corner. Suddenly, this was “labor”! We called the hospital and Carolyn and set out under the light of a full moon. I put the rainbow relaxation tape in for the 45 minute ride to the hospital. I was still feeling so totally normal between contractions that I only partially believed this was the real thing. The contractions themselves were completely bearable, as long as I remained very relaxed. On a few occasions I lost focus at the beginning, and felt much more uncomfortable and quite shaky.

When we arrived at the hospital I put on my special birth shirt that my women friends had made for me. I had to wear the fetal monitor for a little while, and needed to get an IV for Group B Strep treatment. Normally, these interventions would have bothered me, but between Carolyn’s voice and my hypnosis practice, I managed to stay inside my head and focus on relaxation. My midwife checked my cervix and said I was 3-4 centimeters. I was disappointed to hear this, because I felt like the day’s contractions should have helped more. Carolyn did an “Emotional Freedom Techniques” treatment to me right then, to help me move away from my memories of the last birth. The good news was, the baby was not in a posterior position. The preparation had paid off! As the intensity began to build, I used my voice to keep me focused during contractions. Somehow, making a low humming sound gave me something to concentrate on. Carolyn helped me to direct the sound down to the baby. This reminded me to visualize my cervix opening. My husband would give me back massage during each contraction. I was very clear about what I needed and what felt good, and able to communicate that to Carolyn and my husband. Although my midwife and a labor nurse were in and out of the room occasionally, they mostly left us to work as a team.

After an hour and a half at the hospital, I suddenly hit a wall of fear. The contractions didn’t feel bearable anymore, and I was losing all the faith I’d initially had in my body’s ability to birth this baby. My sounds during contractions started getting high pitched and fearful. Although my concept of labor included acceptance and surrendering to the process, in the face of this intensity I started looking for a “way out”. Luckily, Carolyn recognized this turning point and suggested trying the tub or the shower. Just as I accepted this, I got the urge to push. My midwife checked my cervix, and sure enough, I was fully dilated.

The next part is a blur in my mind. Pushing was more than an “urge”. It took over my body. I remember saying I was scared, and then not being scared anymore. Looking at my support team, I regained faith in the process. I surrendered fully to the work my uterus was doing to push this baby out. I felt deep inside myself and as though looking on from outside at the same time. In four or five pushes, the baby was crowning. I couldn’t believe it had happened that fast, after only three and a half hours of labor. I felt burning on the last push, but I didn’t tear as my daughter was delivered to us. She was warm and turning pink, and opened her eyes right away. What a prize!

Looking back at the process of preparing for birth and the actual delivery, I see it as a metaphor for life as a parent. So much of learning hypnosis is about the process, not the goal. The work of the practice is as valuable in the moment as it is to the labor itself. Being with children is also like this: they live in the moment, regardless of the goals I set for the day. Faith in the process of labor has become faith in the process of being a mother. Instead of trying to adhere to my own or others’ expectations for my children, I try to surrender to the needs of the moment. The deeper I go in the moment, the more my goal – happy children and relaxed parents – achieves itself. My birth goal of a healthy baby and freedom from fear achieved itself because of the work I did each day to make that happen, not any great last-minute effort during labor. I’m so thankful to have learned self-hypnosis, as the daily “labor” of parenting continues.

back to birth stories »